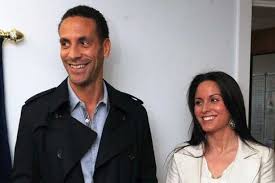 Today we’ve heard the terrible news Rebecca Ferdinand, pictured below with her husband Rio Ferdinand, lost her short battle with cancer.  So what has this got to do with Julie, my wife?  How are they both connected?  Here’s how.  Both Rebecca and Rio and  Julie and I both have three children.  Both Rebecca and Julie fought and in Julie’s case, is still fighting Cancer, albeit different types, but both just as deadly.  Both Rebecca was and Julie still is being treated for this life changing disease in The Royal Marsden Hospital in London.

The picture of Julie and I (left )was also taken before she was diagnosed and at that time we had no idea of the onslaught that was to engulf our family.

If anyone who has never been this situation tells you they know how it affects you, your family and your life in general, they don’t.  As Rio, Rebecca and their families have found out, one day you are going to work, speaking to each other normally, laughing, arguing and just living life as normal, then someone presses the button which says you have cancer.  When this happens, boy, your life changes.

It takes a little while to digest how this affects your life.  Julie and I both decided within hours how would tackle the situation.  She was told without me, at that stage when I was summoned to join her in the hospital where we  were only told “the fibroid” wasn’t a fibroid but a huge growth which (had been misdiagnosed) was cancer. We were told the diagnosing hospital couldn’t treat it successfully as they didn’t have the knowledge and duly referred to the Royal Marsden Hospital in Chelsea (below).  I say we because although Julie has the disease,  we fight it together.

When we first arrived at the Royal Marsden, we had no idea what news was about to be given to us, we had booked into a hotel, stopped on the way from Earls Court to Chelsea at a local wine bar for a drink because we were early before going into register and enter the packed outpatients waiting room.  Julie was called more or less on time or probably a little later and we were taken to an examination room.  A man, possibly about my age entered with a specialist nurse entered and introduced himself as Ian Judson, “Ian” it turned out is Professor Ian Judson, the softly spoken he

ad of the Sarcoma Unit and one of the foremost oncologists in the world! His specialist nurse, Alison Dunlop a straight spoken Glaswegian lady with a difficult job, supporting and imparting information to mainly but not always, incurrable patients.

Professor Judson sat on the bed dangling his legs, and started speaking. “After studying the scans sent by your hospital, It’s not the nodules in your lungs which are concerning me, I think we can deal with those relatively easily but the tumours on your liver.”  I didn’t want to ask the question,  before I could gather my wits and say anything Julie asked “So you’re saying I’ve got lung and liver cancer?” The professor went on to explain the type of cancer Julie has is a Uterine Leiomyosarcoma, a rare type of cancer which form in muscle tissue.  This he went on to explain had been dealt with but because it had been left too long had spread to the liver and lungs.  I could see Julie had been taken back so I started asking the questions.

Obviously we needed some sort of prognosis. “Until we’ve done our own scans, all I can tell you is that it is incurable.  We are very good at what we do here and have access to different and more radical drugs which other hospitals don’t have” Prof Judson continued.  ” He has a way of giving bad news without making it seem like a major disaster, in fact all of the staff at The Marsden are the same. “Alison will go through the details of the first treatment we’ll try which is Doxorubicin, if this doesn’t work we’ve plenty more in our armoury.”  Plenty more was said I’m sure but that is what stuck in my head.  We shook hands and the professor left.

Alison went onto explain the side effects of the drugs and how it would be administered then reiterated how this wasn’t the only drug to use, she also said as did Ian to go home and think about all that was said before making a decision as this was a lot to absorb.  You’re telling ME !!

We went back to the hotel, discussing this monster inside Julie and how to tell Leah, Hannah and Nathan, our three children and her mum and dad.  Prior to dinner that evening over a drink Julie said to me ” I’m not giving up without a fight, this fucker’s not taking me easily!”

I’m pretty sure Rebecca and Rio probably had a similar experience to us, this beacon of light, The Royal Marsden, gives all the same treatment and the staff never give up until all avenues are exhausted and even then they continue to give pallative care.  The Ferdinands and their families will have cried together, hugged and kissed each other, made vows to one another, unfortunatley Rebecca has lost her fight, it is up to Rio to be both mother and father to his three children as they grow up missing their mum.  Ours are all grown up but as a close family it’s no less painfull.

As I write this Julie is in bed recovering after another bout of chemo, feeling and being sick and sleeping while this, her third different drug in the last 12 months does it’s stuff, hopefully.  I don’t know how much time we have left together, after being with each other for 40 years and married for 35 of those, I guess we’ve been lucky so far.

My heart goes out not only to Rio, his children and family but also to all of the many cancer sufferers who have to deal with this disease because I know how you feel.

With cancer, you get up in the morning, it’s there, you close your eyes and wake up, it’s there, whatever you do every single second of every single day, it’s there, waiting like a dragon to sneak up and when it’s ready, to eat you.  The only way to live with this monster is to accept what it’s capable of and fight.  Sometimes you feel like you are winning, other times, you are backed into a corner.  If you are lucky, the dragon’s hunger stays satisfied.  Other times as in Rebecca’s case he sneaks up behind you and feeds.

To the Royal Marsden I say this, your work is invaluable, even if sometimes the results are negative, your attitude is always positive.  Keep up the good work!